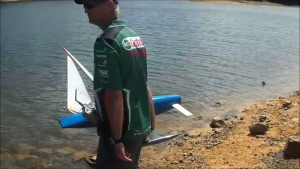 Glen Riley sailing his new Davidson design has a one point lead over Doug Kane after the first day of the club champs. The series continue over the next two club days with a total of twenty four  races with sixteen to count. 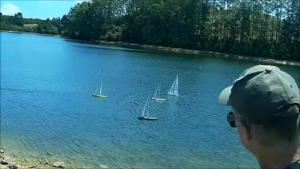 Another light day that made a bit of a lotery of the racing. Glen Riley managed to sneak around the course for the win 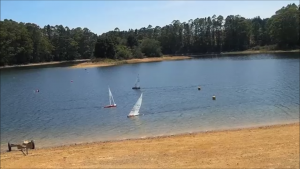 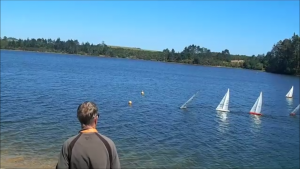 Wind conditions can only be described as calm. Neils D5 coasted along to be top of the scoreboard 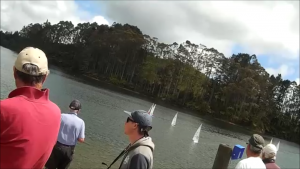 Again it was a very shifty and light day with breeze from the North. Mark Foy races were great with Race Officer Alistair Smith working out new handicaps for each race. Nathaniel Deverell managed to find puff from somewhere to be first place after eight races 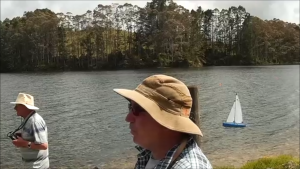 Very difficult day for the ten sailors as the north breeze fluctuated from one side of the course to the other. At the end of the day Doug kane caught the wind and was top dog. 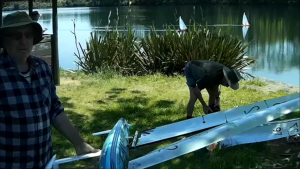 Very light shifting conditions. Doug Kane  managed to find the wind to be one point ahead of Dean Lutze after eight races in the elevin boat fleet 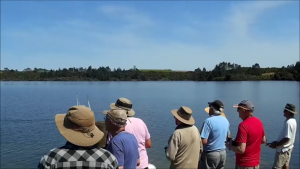 With twenty-one boats on the start line the racing was intense for the first day with top end of A rig conditions for the first few races on the Saturday.  All boats eventually changed to B rigs as it became impossible to sail downwind in the 22 knot gusts.

Ian Vickers sailing the new V11 design quickly showed who is king putting a long string of 1st places together during the afternoon racing.  Racing was close with the remainder of the fleet; with only  six points separating the top five after Ian at the end of the day.

Youngster Nathaniel Deverell sailing his new D5 with a 3D printed deck was second overall after Saturday’s racing; he also won the Rum Race; however, being so young he had to share the rum with the rest of the sailors and this went down well with the pizza supplied to all after racing finished on the Saturday. Sunday morning came and things looked great with a nice light westerly breeze. Sun was out and sailors rearing to go. Start  time 10 a.m. and the wind died to nothing and race officer, Barry Agar  was left scratching his head wondering what to do!  Wind ended up continually shifting around the four quarters with boatman, Doug Kane, having to spend a lot of time relaying marks which was almost an impossible task. Barry managed to get five races away before calling it quits early  afternoon. Top ranking sailors Graham Cross and Pill Pryde pulled out their light weather sailing skills to advance to second and third on the leaderboard. Roddy Booth also pulled one out of the bag to win the last race that was enough to break the tie with Nathaniel to secure 4th place and top Kerikeri sailor.

Well done, to Ian Vickers who showed his supremacy and seems to be edging further ahead of all his opposition in New Zealand. He looks to be on form for the coming World Championships in Brazil in November.

Full marks has to go to Race officer,  Barry Agar, for keeping the regatta on track and keeping everyone honest. Also, Commodore Doug Kane did a lot of running around  with mark laying, sorting the boat launching area and organising refreshments along with the rest of Kerikeri radio sailors making this a great event!

Roddy Booth again showed the way around the racecourse in the nice A rig westerly breeze conditions. Good fleet of 15 boats had some nice battles